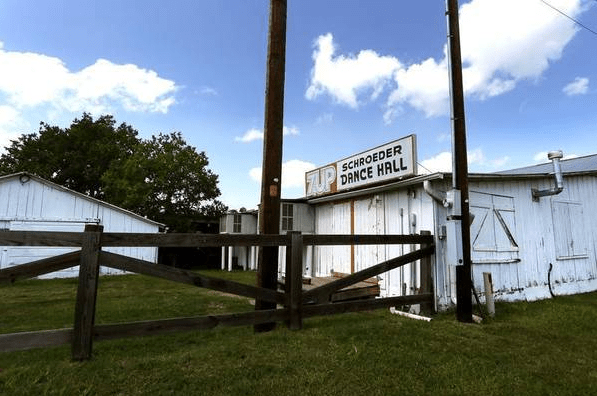 SCHROEDER – Long heralded as one of the greatest dance halls in Texas – where Merle Haggard, George Strait and Tammy Wynette have entertained crowds – Schroeder Hall is getting a new dance partner.

Having survived decades of brutal Texas weather and rock ‘n’ roll music, the dance hall is trading hands. Doug Guller, who owns the Bikinis Sports Bar and Grill chain and ATX Brands, and new manager and booking agent Stephen Dean have purchased the iconic venue from the Kleinecke family.

Dean, the co-founder of Texas Dance Hall Preservation Inc., prides himself on nostalgia.

He was pivotal in reviving Sengelmann Hall in Schulenburg and others across Central Texas. He’s up to the task of breathing new life into Schroeder Hall, 12516 Farm-to-Market Road 622.

Perhaps the biggest thing that will change about the hall is its tag line.

Dean, an expert in Texas dance halls, said Schroeder Hall is not the second oldest in Texas, and Gruene Hall, for that matter, isn’t the oldest.

The first dance at the present Schroeder Hall wasn’t until July 16, 1935, according to Advocate archives.

Back then, the hall was lit with lanterns. Throughout the years, owners added air conditioning and new wooden tables.

Aside from correcting history, Dean plans to start an outdoor music festival, secure a liquor license, bring in new country artists and make the venue smoke-free.

“I don’t want people burning the hall down or putting their cigarettes out on the dance floor,” Dean said.

There’s one thing he wanted to make clear, given the new owner’s business background: “I am not going to bring in bikini babes,” Dean said.

Sharon Kleinecke, who has run the business since 2000 with her husband, Jack Kleinecke, said the dance hall is in good hands.

She wanted to sell to somebody who loved dance halls as much as she does.

“Jack and I have loved that place, and we are so honored to have run it as long as we did,” Kleinecke said. “It’s a beautiful dance hall. Love it, go dance in it and just enjoy it.”

This isn’t the first time the hall has changed hands. Throughout the years, it was owned by Edward Scherlen, Byron and Helen Hoff with the help of their daughters Linda Kickendahl and Marilyn Hamilton, according to Advocate archives.

Hollywood might portray these venues as honky-tonks or roadhouses, but that’s a far cry from the truth, Dean said.

Dance halls were pillars of culture and heritage for Czech and German immigrants who passed their music down through the generations.

While Schroeder is known as a family venue, its past is speckled with colorful stories that have been passed down through the years.

Drunk off hooch and jealousy, a young man at the dance hall became the subject of one of those stories.

Inside the hall, as his sweetheart danced with someone else, he could no longer contain his rage.

He mounted his horse and rode into the hall, knife and gun in hand. People scattered and screamed as he grabbed a guitar from the musician and cut its strings before shooting out the lights and riding out into the darkness.

The night Tammy Wynette and George Jones played, an admiring fan gave Wynette a dozen long-stemmed roses. Furious, Jones grabbed the roses, walked out the back door and threw them underneath the building.

George Strait shot his first album cover at Schroeder, and many musicians got their start at the famed dance hall.

Country music legend Gene Watson, who filled in for the late Ray Price last August at Schroeder, has his own fond memories of Texas dance halls.

“They were great-sounding places, and people would just be packed in there to hear some real country music,” Watson said. “When I was first starting out, if it hadn’t been for those dance halls all over Texas, I probably wouldn’t be where I am today.”

Jarrod Birmingham, a Victoria musician, has played hundreds of shows at the dance hall throughout the years.

He made history in his own career at Schroeder when he recorded a live album from the dance hall in 2004 and opened for Merle Haggard last spring.

He said the responsibility to keep the dances going depends more on the community than the owners.

“It’s only as good as the people who attend it,” Birmingham said. “As long as we continue to be a part of it, then there’ll always be a Schroeder Hall.”

He considers the sale more of a “passing of the baton.”

“It has ambiance, and it has history that other places don’t,” Birmingham said. “You can’t buy and sell history.”

For some Schroeder supporters, the sale to a man who trademarked the word “breastaurant” is anxiety inducing.

Dawn Arnold, 30, of Victoria, considers Schroeder a second home and doesn’t want that to change.

She started going to shows at the hall in 1999 and said she feels like she’s grown up with the musicians who played there, including Randy Rogers and Stoney LaRue.

“It’s not just a bar; you can go out there and dance, enjoy the music, talk to your friends,” she said. “It’s always fun and has a family atmosphere.”

She and her friends don’t want that atmosphere and quality to change but hopes the new owner brings in new Texas country and Red Dirt artists.

There’s potential to keep the hall heading in a positive direction, she said.

Dean said his goal is to continue Schroeder’s tradition.

“Tons of people are rediscovering dance,” Dean said. “It’s fun; it’s a great social thing; it’s healthy, and once you dance in a real historic dance hall, there’s nothing else like it.”