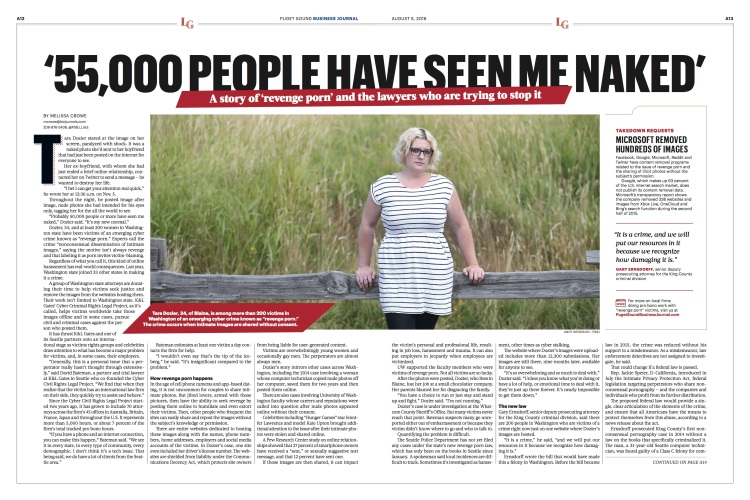 The story how an emerging cyber crime is affecting the lives of hundreds of women in Washington state.

Tara Dozier stared at the image on her screen, paralyzed with shock. It was a naked photo she’d sent to her boyfriend that had just been posted on the internet for everyone to see.

Her ex-boyfriend, with whom she had just ended a brief online relationship, contacted her on Twitter to send a message — he wanted to destroy her life.

Throughout the night, he posted image after image, nude photos she had intended for his eyes only, tagging her for the all the world to see.

Regardless of what you call it, this kind of online harassment has real-world consequences. Last year, Washington state joined 33 other states in making it a crime.

A group of Washington state attorneys are donating their time to help victims seek justice and remove the images from the websites hosting them. Their work isn’t limited to Washington state. K&L Gates’ Cyber Criminal Rights Legal Project, as it’s called, helps victims worldwide take those images offline and in some cases, pursue civil and criminal cases against the person who posted them.

It has thrust K&L Gates and one of its Seattle partners onto an international stage as victims rights groups and celebrities draw attention to what has become a major problem for victims, and, in some cases, their employers.

“Generally, this is a personal issue that a perpetrator really hasn’t thought through extensively,” said David Bateman, a partner and trial lawyer at K&L Gates in Seattle who co-founded the Cyber Civil Rights Legal Project. “We find that when they realize that the victim has an international law firm on their side, they quickly try to assist and behave.”

Since the Cyber Civil Rights Legal Project started two years ago, it has grown to include 70 attorneys across the firm’s 45 offices in Australia, Britain, France, Japan and throughout the U.S. It represents more than 5,000 hours, or about 7 percent of the firm’s total tracked pro bono hours.

“If you have a phone and an internet connection, you can make this happen,” Bateman said. “We see it in every state, in every type of community, every demographic. I don’t think it’s a tech issue. That being said, we do have a lot of clients from the Seattle area.”

Bateman estimates at least one victim a day contacts the firm for help.

“I wouldn’t even say that’s the tip of the iceberg,” he said. “It’s insignificant compared to the problem.”

In the age of cell phone cameras and app-based dating, it is not uncommon for couples to share intimate photos. But jilted lovers, armed with those pictures, then have the ability to seek revenge by posting them online to humiliate and even extort their victims. Then, other people who frequent the sites can easily share and repost the images without the subject’s knowledge or permission.

There are entire websites dedicated to hosting these images along with the names, phone numbers, home addresses, employers and social media accounts of the victims. In Dozier’s case, one site even included her driver’s license number. The websites are shielded from liability under the Communications Decency Act, which protects site owners from being liable for user-generated content.

Dozier’s story mirrors other cases across Washington, including the 2014 case involving a woman whose computer technician copied nude photos off her computer, saved them for two years and then posted them online.

There are also cases involving University of Washington faculty whose careers and reputations were called into question after nude photos appeared online without their consent.

Celebrities including “Hunger Games” star Jennifer Lawrence and model Kate Upton brought additional attention to the issue after their intimate photos were stolen and shared online.

A Pew Research Center study on online relationships showed that 27 percent of smartphone owners have received a “sext,” or sexually suggestive text message, and that 12 percent have sent one.

If those images are then shared, it can impact the victim’s personal and professional life, resulting in job loss, harassment and trauma. It can also put employers in jeopardy when employees are victimized.

After the photos were posted, Dozier, who lives in Blaine, lost her job at a small chocolatier company. Her parents blamed her for disgracing the family.

“You have a choice to run or just stay and stand up and fight,” Dozier said. “I’m not running.”

Dozier’s case is under investigation at the Whatcom County Sheriff’s Office. But many victims never reach that point. Bateman suspects many go unreported either out of embarrassment or because they victim didn’t know where to go and who to talk to.

Quantifying the problem is difficult.

The website where Dozier’s images were uploaded includes more than 12,300 submissions. Her images are still there, nine months later, available for anyone to see.

“It’s so overwhelming and so much to deal with,” Dozier said. “Unless you know what you’re doing or have a lot of help, or emotional time to deal with it, they’re just up there forever. It’s nearly impossible to get them down.”

Gary Ernsdorff, senior deputy prosecuting attorney for the King County criminal division, said there are 200 people in Washington who are victims of a crime right now just on one website where Dozier’s images are hosted.

“It is a crime,” he said, “and we will put our resources in it because we recognize how damaging it is.”

Ernsdorff wrote the bill that would have made this a felony in Washington. Before the bill became law in 2015, the crime was reduced without his support to a misdemeanor. As a misdemeanor, law enforcement detectives are not assigned to investigate, he said.

That could change if a federal law is passed.

The proposed federal law would provide a single, clear articulation of the elements of the crime, and ensure that all Americans have the means to protect themselves from this abuse, according to a news release about the act.

Ernsdorff prosecuted King County’s first nonconsensual pornography case in 2014 without a law on the books that specifically criminalized it. The man, a 31-year-old Seattle computer technician, was found guilty of a Class C felony for computer trespassing after he stole images off the victim’s computer, and four counts of cyberstalking. He was sentenced to one year in prison.

More than legal proceedings and criminal cases, the No. 1 goal is to take these images offline. The longer they’re up, the more likely they are to be distributed to more people, said K&L Gates’ Bateman.

Dozier acknowledges that she took and sent the images to her ex-boyfriend willingly. Because she was the one who took the photos, though, she may be able to file for copyright protection on the images, which could force the websites to take them down. Going after the sites for copyright infringement is one way attorneys have been able to help victims get more immediate results.

K&L Gates isn’t the only firm tackling this issue. Other attorneys, including a group from Perkins Coie, are donating their time to gather victim resources for the nonprofit group Without My Consent.

Judy Jennison and Amelia Gerlicher, attorneys with Perkins Coie in Seattle, have contributed to the firm’s nearly 500 hours spent on the project.

The resources direct victims to the civil and criminal statutes for their state, and offer guidance to how to file a lawsuit using a pseudonym so victims don’t have to associate their real names with the case files in the public record. So far, resources for six states have been published, and Without My Consent is fundraising to publish more.

Jennison is passionate about the project, which is why she’s donated so much of her time to help victims.

“It’s not OK to victimize people like this because your feelings are hurt because someone broke up with you and moved on,” Jennison said.

Fighting back against this kind of harassment can sometimes anger the perpetrators even more.

Dozier is not worried about the continued harassment that comes with speaking out. She wants to use her experience to make a difference.

Nine months after the first image was shared, strangers continue to anonymously repost her images. She lost the sense of safety, security and privacy she once took for granted as a young woman in rural Washington. Strangers across the world now know where she lives, her phone number, where she worked, and what she looks like, but she’s no longer phased.

“I feel like they’ve done the worst they can do,” Dozier said.

Google, which makes up 63 percent of the U.S. internet search market, does not publish its content removal data. Microsoft’s transparency report shows the company removed 338 URLs and images from Xbox Live, OneCloud and Bing’s search function during the second half of 2015.