But given the inevitability of a seismic event in the Puget Sound region, the towers that make up Seattle’s skyline need to withstand shakes and quakes of all magnitudes.

For the 44-story F5 Tower — where the networking company will move in 2019 — on Fifth Avenue and Columbia Street, engineers and architects pushed the boundaries of design — six degrees, to be exact — to prove a new way of building towers in seismic regions.

The tower pitches in arresting geometry over a century-old Methodist church and the historic Rainier Club. Allyn Stellmacher, a partner at ZGF Architects, the firm behind the project, called the design “poetic.”

“We’ve seen a lot of development and there’s been a handful of people pushing in new directions that I think can help change the way the skyline is shaped,” Stellmacher said. “I think we’re going to see more of that ‘bigthinking’ in the way people put their buildings together and the way ideas hit the skyline instead of big boxes.”

John Worley, a principal at Arup, the structural engineering firm behind the F5 Tower, said its mega-brace technology will be a game-changer not only for Seattle’s skyline, but for other cities in earthquake prone areas.

In traditional design, the concrete core where the elevators are located does the bulk of the work to keep a building intact through an earthquake. Because F5 Tower is so narrow, architects from ZGF and engineers from Arup in San Francisco looked to the walls to carry the load rather than sacrifice valuable rentable floor space to make a larger concrete core.

It’s a system that hasn’t been seen before in high-seismic regions, Worley said.

“We have another building here in San Francisco with mega-bracing, 181 Fremont St., that followed suit after this one,” he said. “It looks very much like this building and has a lot of similarities.”

Steel structures called mega-braces zip up the sides of the building, working with the concrete core to stabilize the tower. The core houses 12 elevators and has concrete walls as thick as 30 inches.

The tower was too tall to fit into Seattle’s standard earthquake building code, Worley said, so the team ran its models through simulated earthquakes. The design was also reviewed by a special peer-reviewer hired by the city.

Arup successfully tested the tower 28 times against the recorded ground motion of seven earthquakes that have occurred elsewhere in the world. The test quakes were consistent with what Seattle could experience. The analysis involves modifying the soil’s stiffness against the basement walls and foundation to capture “the worst-case effect” on the tower, Worley said.

The F5 Tower is designed for a 2,475-year quake, which could potentially have a magnitude of 9.0 on the Richter scale.

Because it was such a new design, it was difficult to demonstrate to the city that the performance was acceptable, Worley said, but ultimately the system was approved. 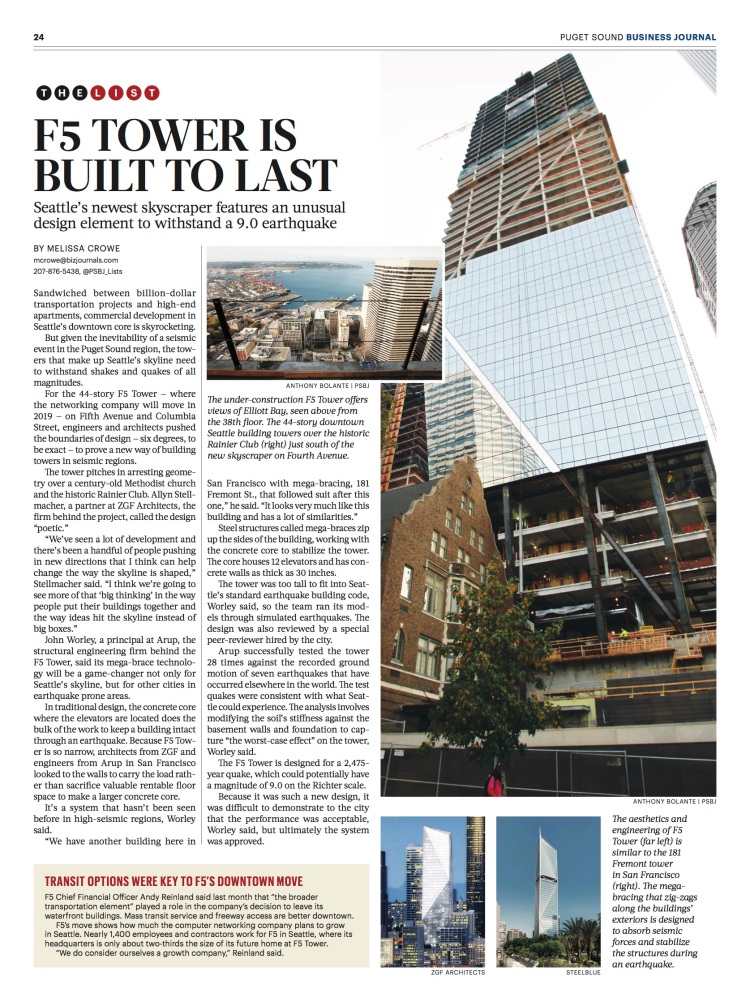